If a piece of steel or a piece of salt, consisting of atoms one next to the other, can have such interesting properties; if water—which is nothing but these little blobs, mile upon mile of the same thing over the earth—can form waves and foam, and make rushing noises and strange patterns as it runs over cement; if all of this, all the life of a stream of water, can be nothing but a pile of atoms, how much more is possible? 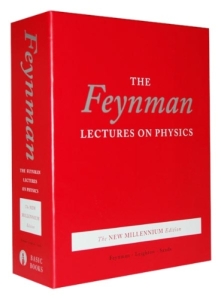 Richard Feynman – jokester, safe cracker, bongo player, artist and Nobel-winning physicist – is revered by physicists around the world for his set of undergraduate lectures. Presented by him at Caltech in 1961-63, the lectures were adapted into textbooks that would set you back one to two hundred dollars – until now.

Caltech has just released an on-line version on a new website. It’s beautifully formatted with full html links, and best of all, it’s completely free.

While the majority of the text is by nature quite technical, the first four chapters can be enjoyed, I think, by anyone. Read them and enjoy his poetic descriptions, philosophical digressions, and ecstatic appreciation of how things work – and join the rest of the world in desperately wishing you had him as your teacher.

And to whet your appetite, enjoy this animated adaptation by Fraser Davidson of one of Feynman’s most renowned monologues. Taken from the 1981 BBC documentary The Pleasure of Finding Things Out, it features Feynman describing beautifully how science enhances his appreciation of the world around him – a fittingly poetic refutation of Keats’ famous assertation that scientists only detract from nature when they ‘unweave the rainbow‘.