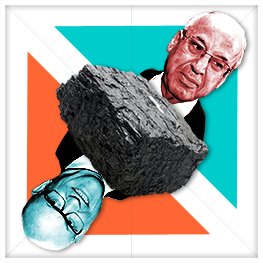 Yesterday, Australia’s independent corruption watchdog found that former Labor party figures Eddie Obeid and Ian Macdonald had acted corruptly. Obeid, a former New South Wales Labor party powerbroker, and Macdonald, the former state energy minister, are now being referred to prosecutors to consider criminal charges. The men, together with several others, had misused inside knowledge from Macdonald’s position in office to make tens of millions of dollars by buying land before it was rezoned for coal mining.

The case has naturally received a lot of media coverage, not only due to the raw facts of the abuse of power, but also because of the show the Obeids put on along the way: son Moses Obeid claiming it could have been Jesus Christ who pencilled confidential zoning information onto a map; Eddie Obeid’s diary giving an entertaining glimpse into the enema schedules of the rich and powerful; and Mr Obeid’s ever-righteous harrassment of journalists: “[Kate] McClymont has been mixing with scum for so long that she no longer knows who is good and who is bad, what is real and what is made up.” The involvement of a prostitute called Tiffanie came as less a surprise than an inevitable trope. Many of us enjoyed sharing the jubilation (schadenfreude?) of the Sydney Morning Herald journalists yesterday as they wrote and tweeted about the ICAC findings that vindicated their work.

One important aspect of the case, though, hasn’t had much attention. It’s the fact that these politicians weren’t just abusing a position of power, but they were acting corruptly while having oversight of of vast coal reserves – fossil fuel resources whose future use will have huge global environmental significance. In fact, the Economic Demonstrated Reserves of black coal in NSW alone (those we currently know about and deem profitable to extract) make up over 5% of the total global carbon budget.*

The Carbon Budget is the amount of CO2 we as a planet can emit without tipping the world into catastrophic climate change. If we limit our global emissions to about 565 gigatonnes of carbon dioxide, we are giving ourselves an 80% chance of not exceeding a 2°C temperature rise. The problem is, there is already five times this much fossil fuel already in corporations’ reserves. That leads us to this confronting fact: to avoid climate disaster, companies that have already paid for access to reserves will have to be made to write off those investments.

Given NSW’s large slice of the fossil fuel pie, that means uncomfortable decisions should be being made here. Some of our state’s coal will have to stay in the ground – coal that’s already been identified, and in some cases zoned for extraction with leases purchased. Decisions like this will require huge short-term economic sacrifice (for the long-term gain of, for example, not losing major cities to rising sea levels), and will anger a lot of people who would otherwise stand to make a lot of money. It goes without saying that it’ll also require tough, independent regulators and lawmakers. Instead, we’ve had Ian Macdonald and Eddie Obeid, who have addressed the issues by simply making a grab for the money themselves.

If you’re driving a car recklessly, you get punished by the law. But if you’re driving a car recklessly with a baby on board, your sentence increases to reflect the extra responsibility you had to others. What penalty will be given to Obeid and Macdonald for dereliction of duty, when the things they should have been responsible for have such global, long-term consequences?

It should be noted, too, that this problem hasn’t gone away with the ICAC ruling and pending criminal investigations. Current Liberal State Premier Barry O’Farrell has remained notably silent in the wake of the ICAC findings, not only missing a chance to shake up the system, but actively preserving the status quo: he’s just announced the privatisation of Bayswater and Liddell coal-fired power stations, which produce about 40% of all NSW’s electricity, and he will soon sell off Newcastle’s port too, which last year exported 122 million tonnes of coal (and which is ironically predicted to be underwater by the end of the century due to sea level rises). Decisions like this could make it even more complicated for significant environmental-based reform of the energy sector to take place in the future.

The recent ICAC findings show us that the system is working: powerful people who have abused office may now face punishment. But for our future to be secure, it’s no longer enough for the politicians in charge of our fossil resources to be merely honest. They will also have to be almost superhumanly strong in putting long-term benefits over short-term riches. And they will need the public’s vocal support to have any sort of chance.

* My figure is derived from the following data:

One thought on “Obeid and Macdonald: corrupt while in control of 5% of global carbon budget”